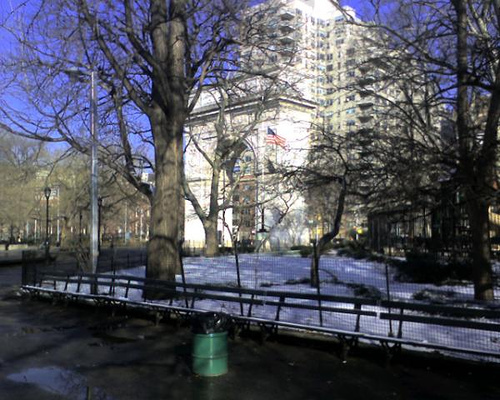 (we had our first snow yesterday, this is Washington Sq. Park with some snow above)

Just found this posting on the accuweather blog that basically says the new weather pattern bringing cold to really the whole US, along with an active southern jet (which typically controls the moisture flow) and above normal sea surface temperatures in the Atlantic off the coast of New England, all point to a monster, if not historic snow storm coming to the eastern seaboard over the next 3-5 weeks…As I’ve said, Feb historically is a fantastic month for snow in NYC, so this pattern change is perfect time. I’m very excited as it all seems to be falling into place. As they say over the Accuweather blog about the possibility of a big storm, “the pattern is right for a big storm in the east….Just where and when is the question.”

It appears “the storm,” could be coming around the 30th of January based on long term model projections. Despite the extremely warm early winter warmth, I think it’s safe to say that New York will probably come close to the 40 inches of snow for the season that has been average over the last 3-5 years. With that said, I’m looking very closely at the contracts trading on tradesportsfor New York City snowfall. I feel pretty confident a big storm is coming, which would make these low trading contract skyrocket (especially for 20, 30, and 40 inches even if these target amounts aren’t reached). Those are very interesting to watch. If you want to make some money (if gambling weren’t illegal in the US) that would be a good place to look.